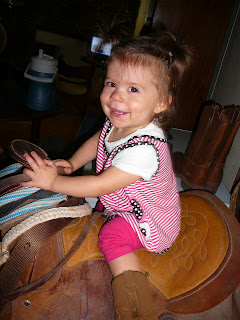 I look at this little person who no longer resembles a baby and can't help but think that time is just flying by, and her babyhood has passed by in an instant. Officially the books all say Sofie is not a toddler yet...but she's not an infant either. She's in an akward stage of leaving babyhood and entering toddlerhood, she's ALMOST 17 mths old in five days!!!! I am a bit sad at this transition into toddlerhood as the baby that once was so very dependent on me is now a little person who loves to help me sweep, "fold" the laundry and feed her doggies when she has a snack in her hand all on her own. She's changing so much the only way I can describe it is like an onion, all these stages/milestones she's passing are just layers that get peeled back. Everyday she learns or masters something. She says a few words not as much as some other children in her play group say but I'm not fretting or pushing her, I tell myself....it will happen in due time. One thing I have learned by staying home with her is she does things on her own schedule......all in due time. I made the mistake of trying to push the sippy cup on her over and over when she turned a yr old but the outcome of that was a screaming child who refused to drink her milk and would not budge. Lesson learned, one point for Sofia zero points for mom on this one. She's stubborn alright and I should not be surprised she gets it from both her parents. But just recently she surprised me, I was washing her bottles/nipples and she wanted something to drink all I had available was you guessed it.... sippy cup. I was hesitant to give it to her only because i could already hear the protesting fit she was about to throw but she took it and as if she'd been doing it for months....she drank from it. I was very surprised and so I tried again but no luck, I told myself ok ...all in due time. She amazes me each day and although I started this journey as a SAHM excited and after a bit I was frustrated I really am starting to see what other stay at home moms have been telling me....it's all worth it. I don't know when I'll go back to working fulltime, I may do it in 2 years or wait until Sofia starts school but one thing is for sure I'll make the decision all in due time.

I love that it's so much easier to communicate with the toddler. I love being able to actually have a conversation. When I look at the little girl I love so much I still see remnants of the baby in her face. I love my toddler, but I so miss my baby. I totally understand how you feel. No need to rush anything.